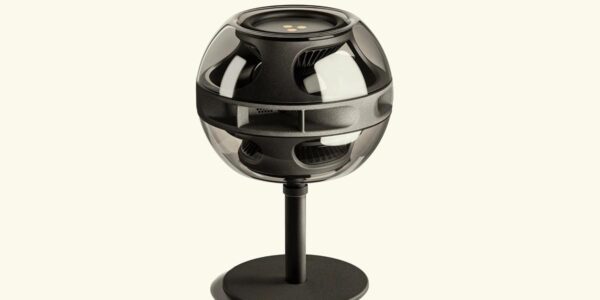 A company called Syng, have released a new loudspeaker called the Cell Alpha Triphonic Speaker. Company co-founder, Christopher Stringer worked for Apple during 21 years and left in 2017 to create Syng. He was involved directly in developments for the iPhone and iPad, Apple Watch, and the HomePod. Stringer is referenced on more than 1,400 US patents. The first Triphonic sound system was actually patented in 1984 by Emil L. Torick (inventor) on behalf of CBS Broadcasting.

The CES 2015 show starts this week and there is sure to be a bevy of new audio gadgets.

Samsung will be showing off their new WAM 6500 and WAM 7500 loudspeakers.

Some other new freaky-shaped loudspeakers that are on the market include the Om One and the Mars.

The Om One from Om Audio is a levitating loudspeaker is available for pre-order for $US 199. Apart from playing music from a bluetooth device, it can also be used as a speakerphone.

Om One from Om Audio

You can watch a promo video on the development of the Om One on youtube.

Another similar levitating speaker product is from Crazybaby in Hong Kong that has developed the Mars loudspeaker. The base station houses a sub-woofer, the floating disc that radiates sound is water-proof. The device has some nifty features that can be used for conference calls, and will automatically adjust the volume depending on the proximity of your bluetooth source from the base station. The loudspeaker is available for pre-order at $US 189 from the Crazybaby web site.